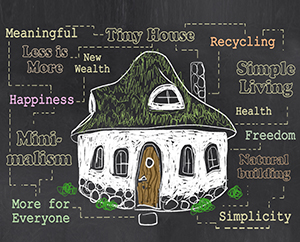 Several years ago, whilst working as an activities co-ordinator for an aged care facility, I took a group of residents on an outing to a large, recently renovated, shopping centre. Accompanied by a new volunteer, a friendly woman in her mid fifties, we assisted the residents off the bus and entered the cathedral-sized glamour of this spacious mall. My volunteer, her eyes alight with wonder, turned to me and exclaimed: ‘Within these walls is everything I would ever need!’ Such are the trappings of consumerism.

With horror we look at the results of environmental and social poverty brought on by the ideology of rampant consumerism. We are all too familiar with the destruction of both habitat and community that exists as a result of the mandate that over-consumption is essential to a flourishing economy. Earth cannot survive this abuse. The continuous pursuit of material possessions has not brought about a perfect world; rather, we see greed, corruption and injustice undermining our world.

Amidst this destruction there stands an alternative voice. It is the voice of a life of radical, voluntary simplicity that shines out as a prophetic, counter-cultural response to the dominant ideology of the so-called ‘first world’. It is a voice of hope that speaks directly into the deepest of human hungers. In addition, radical simplicity brings the life-giving benefit of healing to our planet.

What, then, is voluntary simplicity? It is much more than a life of frugality, for whilst that is a key element, it is about something far broader. Simplicity is a lens through which to view all of life. ‘At its core it is voluntary limitation of our outer wealth so that we can have greater inner wealth… Thus a life with less – less work, less stuff, less clutter – becomes more: more time for friends, family, community, creativity, civic involvement. Less stress brings more fulfilment and joy. Less rushing brings more satisfaction and balance. Less debt brings serenity. Less is more.’1Cecile Andrews & Wanda Urbanska, Less is More: Embracing Simplicity for a Healthy Planet, a Caring Community and Lasting Happiness, New Society, 2009, xiv.

Radical simplicity is a stance of trust. It means returning to a posture of dependence, for a life of simplicity is grounded in the practice of poverty that reminds us of the abundance of life as gift given. It means that we live close enough to the limits of our resources so that we can rely on providence and appreciate the beauty of life. Simplicity fosters spontaneity and truthfulness. Simplicity is also a core requirement of anyone who seeks justice, peace, and equitable stewardship of resources. Simplicity is not simply living with less; it requires serious reflection to sort out what is of necessity and what is of luxury.

Consciously choosing simplicity is radically counter-cultural. It is asking us to take a stance far broader than the dominant culture prefers, to see a landscape where less is more and people make conscious choices about their consumerism. ‘It’s choosing freely instead of being manipulated. I think of it as “the examined” life, a life at which we look at the consequences of our behaviours in terms of the wellbeing of people and the planet. It’s making conscious choices about what’s important and what matters. It’s stripping away the inessential so the essential shines through.’2Cecile Andrews, ‘The Circle of Simplicity’, in Less is More, 54.

At its core, radical simplicity is not about poverty; it is about love. In freeing ourselves from possessions – in choosing a life of radical simplicity – we discover love. This is the love that we witness in the lives of countless millions of people in our 21st century who, in their own actions offer lives of service to the marginalised, victimised and destitute. It is witnessing all those who understand that consumerism offers lives of sacrifice; sacrificing time with family, artistic creativity, freedom to choose – where simplicity offers lives of opportunity; an abundance of freedom to delight in passions of creativity.  Simplicity creates the opportunity for greater fulfilment in work, compassion for others, feelings of kinship with all life and awe of participating in a living universe.

How then do we speak into the collective mindset that has been taught that to desire and then purchase a product will assuage the hunger of not being enough? Further, where is hope to be found in a world geared towards the immediate satisfaction of visceral appetites? One way is to speak about desire, for without desire there would be no consumption.  As with all conversations about hope the idea is to remind, or teach, people of dreaming of a desired future and then undertake the steps needed to reach that goal.

‘We must give people a vision of this new life, a vision that is so exciting and compelling that people will do anything they can to realise that vision. Instead of shaking our fingers at people for their consumerism, we must help them discover a way of life in which they lose the desire to consume.’3Cecile Andrews, ‘The Circle of Simplicity’, in Less is More, 60.

The conversation then becomes around joy, of removing oneself from the push for consumer products by speaking of the joy of having enough time to spend with family, of spacious time previously spent on acquiring money now freed for reading, creating, walking, listening, music-making, observing, community-building.  Indeed, the conversation becomes one of a grace-filled life. To live gracefully is to live within flowing rhythms at a human pace. In a graceful life, there is time to pay respect to the value of what you do, to the worth of those you care for and to the possessions you own. To live gracefully is to know that who you are is more than enough, that you are of worth because of your existence rather than through a measure of your possessions.

… Read more about this topic in Handbook of Hope: Emerging Stories Beyond a Disintegrating World by Cath Connelly, available here.